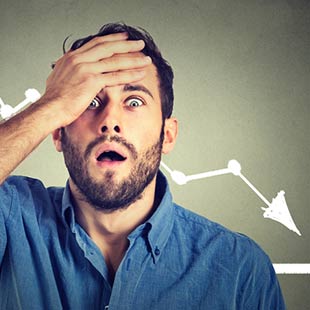 In an effort to provide weak and mediocre salespeople with an adequate supply of poor performance excuses for each month, I submit the following "Reasons I Can't Sell This Month." If you find it difficult to lay all the blame on the weather, the economy, prices, the competition, the Republicans, the Democrats, the President, an election year, or the latest negative world event or fake news story of your choice isn't enough to justify your downward performance, try these…

January: The climax of college football bowl season, the BCS Championship and the NFL playoffs are in high gear. There is some soccer league or cup being contested in every month of the year, so you might as well give up now. Toss out the first week since most people are still on holiday vacation or have a holiday hangover. While you're at it, toss the second week as well since the people that were on vacation are just getting back to normalcy after the holiday season and need time to catch up on their backlog of duties. Besides, the weather is horrible with all the snow and bitterly cold weather. People have no money due to holiday shopping bills. I'll attack next month when the weather is cold and people's systems are dying.

February: In an Olympic year, people are busy experiencing the thrill of victory and the agony of defeat. Too much snow... People don't want us in their homes with the messy weather. Add in the people waiting to see if Pauxatawny Phil sees his shadow on Groundhog Day and hoping there are NOT six more weeks of winter. Throw in Super Bowl Sunday, The Daytona 500, Ash Wednesday, Mardi Gras, Chinese New Year's, Valentine's Day, and the Oscar Awards as big events that consume my customer's time. Toss in Black History month, Presidents' Day, and the fact that it is a short month and you can understand why no one is buying this month. Pitchers and catchers report to MLB camp. Things will pick up next month.

March: St. Patrick's Day, Spring Vernal Equinox, and a few religious holidays possibly falling early and people will be traveling and not have time to see me. Many people have taken Spring Break vacations. Besides, spring weather is coming and most people feel they dodged a bullet with their heating system this year and will put off replacing it until the fall. Dare I mention March Madness. Plus, it's much too cold to think about air conditioning. We should get an early heat wave next month and business will pick up for sure.

April: April showers bring May flowers. And with the showers, the weather is a mess. The religious holidays that did not come early, came late this year. Earth Day has people in conservation mode. Who wants to focus on buying with spring in the air? Besides, it's tax season and people busy getting ready for Uncle Sam and paying tax bills so they have no money. Opening day for Major League Baseball and people want to see how their team does out of the gate. NBA and NHL playoffs are in full swing and the NFL draft has people's minds elsewhere. The hot weather is around the corner and should drive leads and sales through the roof next month.

May: The start of warmer temperatures and the promise of hot weather has arrived and with it Cinco de Mayo. Mother's Day and Memorial Day weekends have people traveling with no time to see me. The NBA and NHL playoffs are headed to the finals. People told me they spent their tax returns paying off credit card balances. The Kentucky Derby and Preakness have any leftover cash reserves being bet in hopes of a Triple Crown winner. Don't forget the Indy 500.There will be more opportunity next month.

June: The first dollars spent this month went to picking a Triple Crown winner or a longshot to upset the Derby and Preakness winner(s). NHL and NBA finals baby! In a FIFA World Cup year for 32 days in June and July, soccer reigns supreme. The kids are getting out of school and people are headed for vacation in droves. Flag Day, Father's Day and the Summer Solstice cause people to lose focus and no one buys in this weather since who in their right mind would replace their air conditioning in the midst of a heat wave. Plus, everyone that would have thought about adding A/C to their home would have done so by now. July will be much better since the sultry nights will cause most older systems to die under the strain of the weather. We'll have at it next month.

July: The hot weather we expected did not arrive. In a FIFA World Cup year, the finals are in July ... must watch TV with no interruptions. With Independence Day this month, people took the week off. Most people are at their beach/shore, lake or mountain summer cottages, out on their boats, traveling in their RVs or hanging by the pool. In other words, with everyone outdoors no one is indoors and thinking about their cooling system. I thought for sure this would be the best month of the year. We'll see what happens next month.

August: In an Olympic year, people are glued to the tube chanting U.S.A. Plus, it's too hot! Besides, most people are on vacation, and I am one of them. Buying clothes and school supplies to get the kids ready to go back to school has consumed any cash reserves left after my customers had to pay college tuition. With people returning from vacation, next month should be much better.

September: Most people feel they dodged a bullet with their AC system this year and said they are going to wait until next year. Considering the long Labor Day weekend and the fact the many people take off the week before or after, no one has time to see me. MLB playoffs baby! The Autumn Equinox, Grandparents Day, and the start of the Jewish holiday season are gaining greater recognition each year. October is the beginning of heating season and things should heat up.

October: Indian Summer, need I say more? People are not thinking heating just yet. Don't forget the Fall Classic – The World Series. Columbus' birthday: We don't have the day off, but many people do and spend it with their kids. Toss in a couple more Jewish holidays. Halloween – my kids have their costume pageant/parade at school and I have to take them Trick or Treating. Plus, I am helping with the Jaycees Costume Party and The Lions' Club haunted house and hayride – it's a four week commitment as part of my volunteer community service. I am going to work hard down the home stretch and finish the last two months of the year strong.

November: Work has slowed for many of my customers and many are skittish about their jobs. Some have gotten laid-off and others are experiencing a cash crunch due to holiday shopping. With Thanksgiving falling in the middle of the week, it kills that week. People that were planning on replacing their heating system already did so or are waiting until next year unless it dies. That could happen next month with the colder temperatures.

December: Isn't it the start of college football bowl season? Where's the cold weather? It's going to be a Green Christmas for sure. Ah dang, we got snow early this year ... can't drive in this weather, it's too dangerous. Besides, people don't buy anything when it snows. Between holiday parties, shopping and visiting with family and friends whose got time? Besides, with homes decorated for the holidays no one wants us in their home. More and more people seem like they are taking vacations in December. Since it is usually slow anyway we planned our family vacation for Disney. The two weeks leading up to Christmas and New Year's are just brutal. Plus, everyone is crying the holiday "cash vacuum blues."

Look on the bright side, if people are not buying from us, our competition is probably hurting too.

Next year will be much better. The Farmer's Almanac is predicting a blizzard to rival the one from 1985 or 2010 early next year and a record heat wave come late spring that continues all summer long. Hurricanes will surely drive business on the east coast while climate change will impact the rest of the country.

Seriously, when you are finished explaining, complaining and blaming everyone and everything for your lack of consistent performance (which is lame and ultimately results in shame); and you are ready to get out there and make it happen and be a catalyst for change and action, then you can quit pointing fingers, feel empowered and take the necessary steps to move your sales and career forward.

Get a coach or mentor. Read a sales book. Attend a seminar. Attend a webinar or teleseminar. Join an online support network. Join a business networking group. Subscribe to a sales newsletter and sales magazine. Listen to a sales podcast. Watch a sales video. These resources will allow you to take your one year of experience that you have repeated many times over and actually learn and apply something new to your craft, because odds are you have not really had any real training and coaching since your first year sales except the product training you have received. You need to become a student of the game; study, practice and improve your craft every day.

Let me know how I can help. The call or email is free of charge! Have a great year!