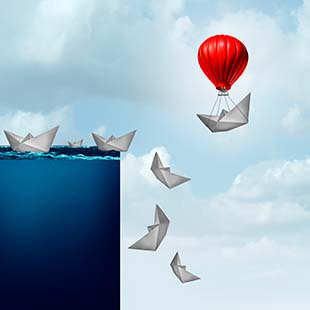 One thing in the life of a contractor is certain: difficulty is coming. Everyone from Biblical prophets to Buddha to M. Scott Peck in The Road Less Travelled accurately predicts trouble and difficulty lie ahead. We don’t know whether it will be a cyclical economic downturn, or a global virus, or a disruption in our supply chains, or an aggressive competitor, but we do know we face challenges ahead in our personal and business lives. Many of you may wonder, “How can my contracting business thrive in the midst of difficulty?” The answer is that positive mindset training is the central skill your team needs to prevail. It is a soft skill, but more important than hard skills like accounting, tech support, or installation. It is the one skill everyone on your team requires because the question is not what effect difficulties will have on your contracting business, but which decisions and responses you will choose that will determine the outcome.

I always have believed that you cannot borrow your way out of a business crunch, but you can sell your way out. I started my first HVAC company in 2004 and within a couple of years had done so well that by 2007 I was in a position to buy out several of my competitors, which meant I was holding a lot of debt when the economy took a steep downturn in the 2008 Great Recession. The bottom did not fall out of my business altogether, but our growth leveled off, and I had all that debt to service. I knew we could not succeed by borrowing our way out of debt, and bankruptcy was never an option for me because as an ex-con, I knew that everyone expected me to go bankrupt. I said we would sell our way out of the crisis. We worked harder on our team’s mindset training, worked our leads more productively, increased our sales and margins, and paid off a half-million dollars of debt in twenty months.

basis: write down your goals and priorities in the 3 main areas of life: business, relationships, and health. Decide on 1 to 3 main action steps to take consistently every day to achieve those goals, then read, meditate on, and imagine the reality of the goals and action steps every day for ten to fifteen minutes in what I call a Quiet Time Ritual. This technique has transformed my life and the lives of thousands of others with whom I have worked. But in the case of large difficulties affecting your contracting business, the entire team might need unified mindset training.

Let me show you how this can work. I was consulting with an insurance business once which desperately needed to grow or close the doors. I asked the owner what was the one action everyone could take in his business which would turn things around. He said that if everyone would commit and make five cold calls every day, no matter what disruptions occurred, the business would thrive. So, we implemented a team mindset training plan in which everyone wrote down, “I make five cold calls every day before leaving the office, without fail.” As a group, they met over coffee each morning and read their goal and action step out loud, even though they were all the same. They encouraged each other positively that they could and would make the five cold calls, and that it would succeed. Within a year, they had tripled their business. One day the owner was leaving the office early to go on a trip. As he closed the door, he remembered that he had only made two cold calls that day. He turned around, went back inside and made three more calls. He said that after stressing the importance of this action step to his team, he could not fail to do so himself. Of those three calls, two resulted in new clients for his business within a couple of weeks.

Now, you might want different goals and action steps for the different departments of your business—front office, sales team, accounting, installation – all of which is easily achievable. But the renewed focus on mindset training is how your contracting business will thrive in the midst of difficulty.

Weldon Long is a successful entrepreneur, sales expert and author of the NY Times bestseller, The Power of Consistency – Prosperity Mindset Training for Sales and Business Professionals (Wiley). In 2003, he walked out of a homeless shelter and built an Inc. 5000 company generating cumulative sales of over $20,000,000 within just 60 months. In 2009, his company was selected as one of Inc. Magazines Fastest Growing Private Companies in America.

Today, Weldon Long is one of the nation's most powerful speakers and a driven motivator who teaches others the Sales and Prosperity Mindset philosophies that catapulted him from desperation and poverty to a life of wealth and prosperity. Weldon has been featured on numerous national and regional television programs, including Fox News Network, First Business Network and Chicago's own WGN.