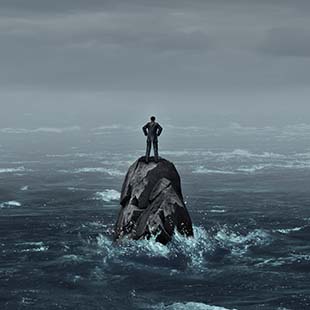 Epictetus, the Roman Stoic was one of two great philosophers of the Roman Empire, the other being Marcus Aurelius. Epictetus was a slave, Aurelius an Emperor. Epictetus once said, “It is difficulties that show what men are.”

It’s not what happens to us, rather it’s how we respond. Are you willing to fail forward? Knocked down seven times, stand up eight! History is re-plete with shining examples of men and women who bounced back from setbacks, challenges, bankruptcy and failure. We only truly fail when we blame others and stop trying to learn from our mistakes. Each of us is 100% accountable for our actions and decisions.

We all suffer. If you live long enough, things are going to happen that you have no control over. Death of a loved one, betrayal, financial setbacks, divorce, surgery, auto accidents, floods, earthquakes and oh yes, Covid-19. The list is long. Again, it’s not what happens but how we respond. There is no better teacher than adversity. Every defeat, every heartbreak, every loss, contains its own seed, its own lesson on how to improve your performance the next time.

Abraham Lincoln is considered by many to be the greatest President in U.S. history. He experienced more failure than any other President, both personally and professionally. A common list of the failures of Abraham Lincoln (along with a few successes) is:

That looks like a pretty glum résumé, making you wonder how he ever made it to the top. The answer? Resilience. He just never quit.

So just how does one bounce back from adversity?

“The friend in my adversity I shall always cherish most. I can better trust those who helped to relieve the gloom of my dark hours than those who are so ready to enjoy with me the sunshine of my prosperity.”
-Ulysses S Grant, President