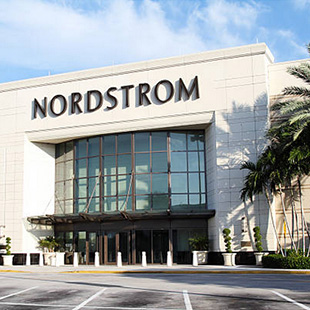 There is a Todd Wilson in every graduating class. He is the early bloomer who has a mustache in the 9th grade. He is a three sport star without really trying. He passes all his classes without doing homework. Todd was 6'2" and 200 pounds at 15 years old. Todd scored 27 points in a junior high school basketball game, could punt the ball 60 yards and had a 90 mph fastball. He had real influence. Whatever he wore, you wanted.

One day in a business class my sophomore year, I asked him about his shoes.

"Oh, I got these at Nordstrom and Best at Aurora Village. My mom buys all our clothes and shoes there."

"Why Nordstrom and Best?" I asked.

"Well, I can take anything she buys there back with no receipt, even if I just don't like them and they give me free pair, no questions asked."

Nordstrom founder Johan (John) Wilhelm Nordstrom was born in 1871 near Lulea, Sweden, 60 miles from the Arctic Circle. His father died when he was eight years old. He emigrated to the United States at the age of 16 with $5 to his name, arriving in Seattle in 1896.

While working at a saw mill in Arlington, he read a newspaper account of the discovery of gold in the Klondike and headed to Alaska to seek his fame and fortune.

He invested in a claim on Gold Run and worked it for two years. He came back to Seattle with $13,000 and started a retail shoe company with his good friend Carl Wallin. Their first store was at the corner of Fourth Avenue and Pike Street in 1901. His three sons eventually came to work for him. They struck real gold selling shoes. He came into the store every day, well into his 90s.

I have read three different books about Nordstrom. The most recent, "The Winning Team," was written by his son Elmer J. Nordstrom.

This is an attempt to understand the unprecedented success as Nordstrom continues to defy the odds in its fourth generation of leadership. Today, Blake, Pete and Erik Nordstrom serve as co-presidents of Nordstrom Inc. Just like their grandfathers did. From one tiny store, Nordstrom has grown into a leading fashion specialty retailer with a global reach. In 2016, Nordstrom earned $3.34 billion.

So why are they so successful? What exactly do they do from a leadership perspective that allows them to continue to prosper? Here is my list. Submitted for your approval.

I need to contact Todd Wilson and thank him for the referral. I wonder if he still shops at Nordstrom? After all, he doesn't need a receipt to get some new shoes, but can he still throw a 90-mile-an-hour fastball? Thanks Todd.

Book of the Month

This little "Bathroom Book" comes in at 99 pages. It is cogent, succinct, simply written in a conversational style. There is gentle, humble quality to the writing. I believe it was written to honor his father.

"Writing this book was not my idea. However, occasionally I am asked to speak to our personnel, to tell them about the old days and the things that worked well for us. For the most part they are simple things, but it is good to hear about them now and then, so that they are not forgotten. Unfortunately my brothers aren't here today, so it is up to me to write this book. I would like to dedicate it to their memory. Here then, is our story." — Elmer Nordstrom